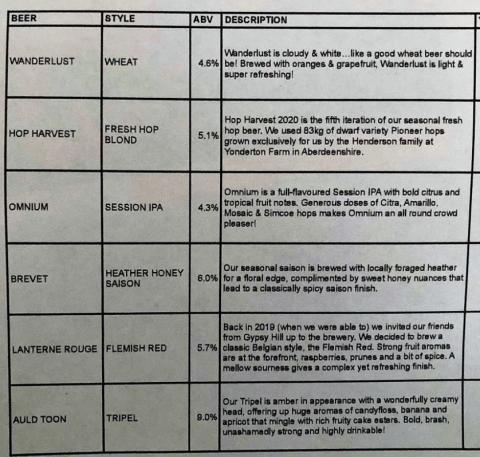 On Wednesday 24th March, 11 branch members gathered virtually in the company of Grant Henderson from Six Degrees North for a tasting of six of their core beers. Grant was huddled in a corner of the bar in LittleJohn Street. Over a 2 hour period we enjoyed fine examples of 5 Belgian beer styles and one traditional IPA, while Grant told us the history of the brewery and the provenance of the ingredients in each beer.

The event was highly memorable. See the image for a list of beers and tasting notes. A straw poll at the end of the evening resulted in every beer receiving at least one vote for "favourite beer", a sure sign of quality in the entire range. However the most popular beer of the night was the Flemish Red called Lantern Rouge.

It was disappointing to hear about the closure of the 6DN pub in Edinburgh New Town, but the bars in Partick, Dundee, Aberdeen and Stonehaven remain open. There was good news for cask fans, because 3 beers (Chopper, Omnium and shortly Echelon) will be available as cask ales.

There is a demand for further beer tastings. Watch the Branch Calendar and the Aberdeen CAMRA Facebook group for updates.