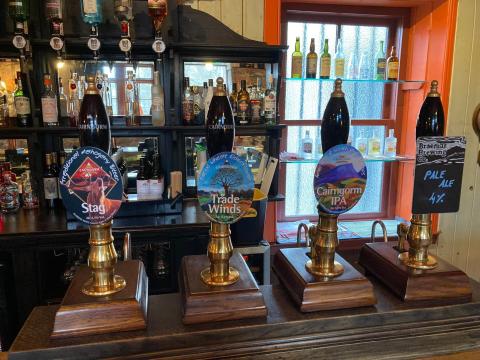 A few branch members resident in Deeside took a bus trip from Banchory to Braemar recently, for the intention of a wee hill walk. Of course, they took the opportunity to visit a few of the real-ale outlets in the region; always a good bet when you have a pass.

After the walk near Braemar, a beeline was made for the Invercauld Mews, where, yet again, a full house of 4 handpumps were on – 3 Cairngorms and Braemar brewery Pale Ale. When-in-Rome, everyone stuck to the latter. While paying the tab on departure we were offered the “Fife Arms discount” of 10% - not quite sure why, but it was gratefully received as their headline prices are back up to £5.50 again. Despite this, we were told that the cask ales there outsell the keg beers.

Although it was after closing hours at the brewery, the guys called Dave from the brewery. He interrupted his own drinking session (at Farquharson’s) and met us down at the brewery, where I got my growler refilled with cask Oatmeal Stout. He’s now got 4 beers in his range – the aforesaid Pale Ale and Oatmeal stout plus Summer Sun (Amber – 4.5%) and one I hadn’t seen before – 80/-. He’s still only got 3 outlets for his cask ales – Braemar’s Invercauld Mews and Cairn Grill plus Ballater’s Balmoral Bar.

Dave said the month of March was his busiest yet and he’s struggling to keep up with demand, particularly on the bottled range, which he’s trying out in outlets like Farquharson’s which don’t do cask ale. We noted he had a quantity of Pin’s in stock and he hopes that will eventually get his cask ale into some of the Deeside outlets that can’t take a full keg.

We didn’t have enough time left to check out the Fife Arms nor the Cairn, which is pretty much a restaurant nowadays, particularly since Braemar Lodge burned down.

We caught the “magic bus” back – so called because it stops in Ballater for 40 minutes – just enough time for a pint and a pee at the Barrel, which, as usual, had 2 Windswept beers on – APA and Hurricane.

The Deeside Inn announced a couple of months ago that it was undergoing a major refurb and would be changing its name to the Balmoral Inn – neither of these has happened yet. The two handpumps are still in the lounge but it was even more full of old furniture than a few weeks ago – you could barely get in the door for all the upturned tables and chairs etc. The refurb is happening in the rooms first of all, but it seems that it will be some time before the lounge is open again. The entrance overhang still says Deeside Inn.

Regrettably, the guys didn’t get time to have a beer at the Alexandra.

We always ask ourselves why little Braemar and Ballater are so much better provided for ale drinkers than Banchory?