Beer in Bottle or Can 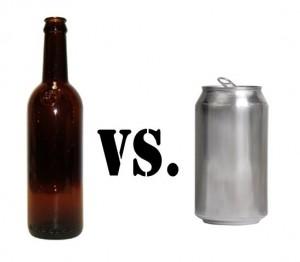 Beer is a product made from natural ingredients and does not have an indefinite shelf life. The taste reduces rapidly when beer is exposed to light, air and high temperature. If not in Cask or Keg, beer is sold either in bottles or cans. Why do some breweries choose bottles while others choose cans?

All beer tastes better when poured into a glass and not drunk directly from either the bottle or the can.

A survey of the brewery in our branch region indicates that there is a slow migration from bottles to cans. At time of writing, the situation is this:

Real-Ale in a Bottle or Can?

CAMRA has long recognised bottle conditioned beer as Real-Ale-In-A-Bottle. The bottle-conditioning technique involves bottling beer that contains little or no carbon dioxide and then adding priming sugars that yeast will ferment in the bottle. Beer can also be conditioned in a sealed can. The process varies in the manner that the vessel is filled. In a bottle, a combination of CO2 and a vacuum is used to suck as much of the oxygen out of the bottle as possible before filling. For a can, a vacuum could crush the can;  Instead, the empty can is flushed with CO2, immediately filled with beer, then the lid is secured. A fully sealed can is able to hold more pressure than the rubber seal inside the crown of a bottle. But with the level of pressure that we’re dealing with, both seals perform perfectly.

Quality: Cans are sealed and cut all Ultraviolet light, which can cause oxidation that gives beer an unpleasant taste. Bottles address this with the use of brown or green glass to reduce the effect of UV.

Taste: Historically cans may have imparted a metallic taste to beer. Modern cans are plastic coated on the inside. Any bad taste can be traced to a problem in the brewing process, and not with the container.

Environment: With the brewing industry looking to minimize its carbon footprint, the environmental impact of different packaging options is increasingly important. While both bottles and cans are recyclable, aluminium cans are typically more readily recycled.

Bottles require more cardboard packaging to prevent breakages. The downside to cans is the environmental cost to produce aluminium.

Logistics: The main advantage that cans have over bottles is size and weight. Cans weigh less than bottles and occupy less space, meaning they are easier to transport than bottles. Lower transportation costs are appealing to breweries and consumers alike.

Marketing: There is a trend to beers with quirky names and funky labels. Do these influence the consumer and the value proposition? The more traditional breweries seem to prefer bottles, but the craft breweries lean towards can.

Conclusion: There are passionate proponents on both sides of the cans vs bottles argument. While it may never be laid to rest, it’s good to have an idea of the pros and cons of both. There’s a place for both cans and bottles, with both offering advantages over the other depending on things like style and practicality. So, be it by the bottle or the can, let’s raise a toast to great beer!