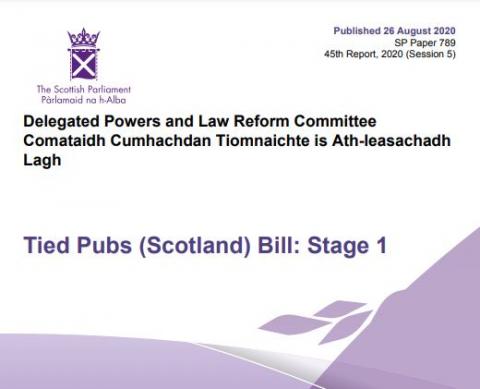 The Tied Pubs Bill has passed in the Scottish Parliament by a unanimous vote 111-0. This means the 17% of Scottish pubs that are tied to a pub company will get new rights similar to those granted by the Pubs Code in England and Wales.

This is the result of five years of hard campaigning by many organisations including CAMRA in support of the Bill, which started as a private member’s bill by Labour MSP Neil Bibby. It has been a hard fight. CAMRA urged the Scottish Government back in 2015 to adopt the Westminster legislation passed then. Since then we have seen the government dragging its feet, promising consultation after consultation.

As late as last winter the Bill seemed doomed when it was voted down at committee stage. But in a last-minute U-turn in November, the ruling SNP swung behind the Bill.

Now Scottish pubco tenants will gain the right to a market rent option and a guest beer. The delay will also allow Holyrood to examine what has worked well in the English legislation and what can be improved on.

Scotland now has over 200 small independent breweries that often find it difficult to get their beer into pubs. The guest beer option could open up the market to them, leading to greater choice for drinkers.