Now it is time to salute Windswept Brewing Company (Al Read, Nigel Tiddy and Stuart Evans) who produce such a marvellous range of quality real ales and bottle-conditioned beers. They are worthy winners of this year’s Campaign for Real Ale Champion Beer of Scotland. 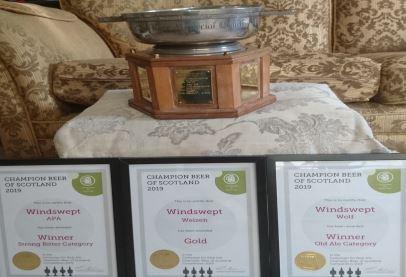 Considering that Orkney, Highland Brewing, and Windswept all feature in Aberdeen and the Northern Isles, our branch has won the title nine times!

CAMRA members can complete Tasting Cards to comment upon the quality of the beer they drink through the year. These are submitted to a central coordinator. Accumulate enough good reviews via the Tasting Cards, and beers can be added to the shortlist of beers of each style. Scottish CAMRA beer festivals often host qualifying beer-style competitions, which help beers gain entry to the national Champion Beer of Scotland competition.

Former winners of Champion Beer of Scotland are: