In the early 1970s, CAMRA coined the term ‘real ale’ to describe traditional draught cask beers, distinguishing them from the processed and highly carbonated beers that were promoted by big brewers at that time.

Real ale is a ‘living’ product, which is typically produced and stored in a container called a Cask. In comparison to other types of beer that kill off the yeast and artificially inject the beer with CO2 prior to serving, real ale contains live yeast which continues to condition and ferments the beer until it is served.

Real ale is always served without any extraneous carbon dioxide, nitrogen, or any other gas pushing it from its container. Real ale is traditionally pulled manually with a hand pump or by gravity dispense. Real ale that’s conditioned and served this way is also known as cask ale or cask beer. The terms cask ale or cask beer are used to differentiate from keg beer. Both cask beer and keg beer are brewed in the same way — same ingredients, same processes. The only difference is how the beer is treated after primary fermentation is complete.

Like any artisan product, real ale requires special handling and storing to ensure the quality of taste. Well-kept real ale served at the right temperature should be lively, naturally carbonated and flavourful – representing the pinnacle of brewing art. A simple guide to good Cellarmanship is available here.

To best enjoy real ale, consumers should opt for beer served from the traditional hand-pull or direct from the cask rather than from a keg line. You can also enjoy real ale served in bottles and cans, as long as they are ‘bottle conditioned’.

Casks resemble typical barrels in that they have a larger circumference at their middle than they do at their ends. They’re designed to rest on their sides when filled with beer that’s ready for dispensing. They can be made of wood, steel, aluminium or food-grade plastic. 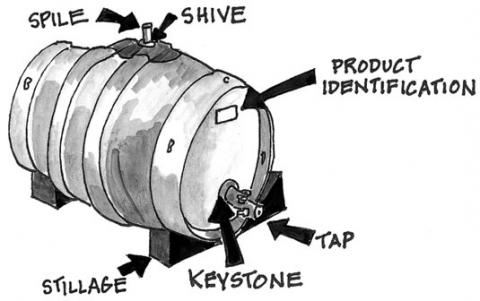 Casks come in various sizes. Because of the nature of real ale — poor stability, limited shelf life, and so on — most brewers prefer to package their beer in smaller vessels to ensure product freshness. The smaller the vessel, the quicker its contents are emptied. Therefore, real ale is typically found only in pins, firkins, and kilderkins.

A cylindrical container like the one shown below is a Keg, and is unlikely to contain real-ale. They stand vertically and beer is dispensed via a "spear", using CO2 to replace the volume taken from the container. 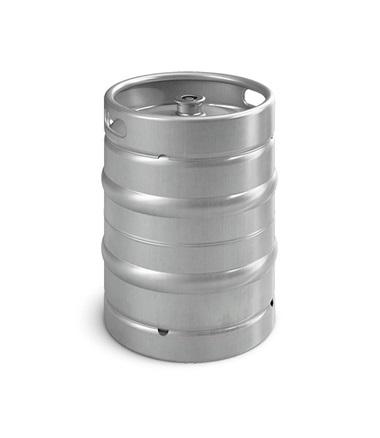 The key-keg system seals beer in a flexible synthetic bag held inside a gas tight rigid plastic outer. To serve the beer, the space between the bag and the outer ball is filled with pressurised gas (typically CO2 or compressed air), forcing the bag to collapse & pushing the beer out to the bar. Effectively, the Key-Keg is a cask which shrinks as the beer flows. The gas never comes into contact with the beer so any gas can be used. Because the gas never touches the beer, it doesn’t make the beer “gassy” the way beer from traditional kegs can be. Importantly for CAMRA, it means that if what went into the bag was real ale – unpasteurised, unfiltered beer containing live yeast - what comes out will still be real ale – beer which has “matured by secondary fermentation in the container from which it is dispensed, and served without the use of extraneous carbon dioxide.”

Look out for bottles that say they are "Bottle Conditioned", as this implies they are "Real Ale in a Bottle".

Bottle-conditioning involves bottling beer that contains little or no carbon dioxide and then adding priming sugars that yeast will ferment in the bottle. This refermentation (so called because it is performed after the original fermentation of the beer is already finished) gives off carbon dioxide, which dissolves into the beer, giving it natural carbonation. In this context the word “condition” refers directly to the carbon dioxide (CO2) content of the beer; brewers refer to “bringing a beer into condition.” Bottle conditioning, when done properly, can result in a beer with a finer, silkier texture of carbonation, superior foam retention, more complex flavors, longer shelf life, and better aging ability than beers that are “force carbonated.”