The Aberdeen Beer Festival organised by Aberdeen CAMRA ran from the late '80s every year consecutively up to 2016, with venues at Cowdray Hall, McClymont Hall and latterly Pittodrie Stadium. Read on for a history of the event - perhaps you were there or have the pint glasses in your cupboard?

The contribution made by the long standing festival dictator coordinator was recognised by the branch at an informal ceremony.

Every year from 1995, one outstanding beer was crowned Beer of the Festival.

At 11am on Friday 18th September 1987 the doors of the Cowdray Hall opened to the very first Great Grampian Beer Festival (GGBF).  This was the first time the local CAMRA branch had hosted a beer festival although some of the members had helped out at other ventures run by the city’s council and local hotels.

The name of the festival was a play on the acronym of a much bigger event run south of the border by the parent CAMRA organisation; the Great British Beer Festival (GBBF).  Although the local festival was small in size, just 20 different beers and scheduled to run over two days it proved very popular (all the beer drunk several hours before closing time) and paved the way for a larger follow up in 1988.

Not too many Scottish Breweries were producing real ales back then. Most were located much further south with little or no distribution in the north-east; the one exception being the Devanha Brewery. Most of the rest of the line-up being from regular suppliers to the city’s pubs like Jennings, Theakston, Youngers, Ind Coope and Alloa.

In 1989 it was decided to re-locate the festival to the McClymont Halls on Holburn Street in order to cater for increased visitor numbers and a larger beer range, now over 30. The festival was re-scheduled to October following an appeal by the city’s student population several of whom were now volunteering to staff the event.

The number of supplying Scottish breweries had increased with the likes of the newly opened Orkney Brewery and Caledonian who had recently risen from the Lorimer & Clark corporate restructuring together with Broughton and Maclays who were getting strongholds in the city’s pubs. The enigmatic Traquair who had been brewing again since the mid-60s along with relative new Harviestoun who started in the mid-80s and more locally the recently relocated Borve; having moved from their original Western Isles location to our branch area at Ruthven.

As the years rolled on the beer range had continually increased, first breaking the 50 barrier in 1994, but it was still not so easy to source beers from too many Scottish breweries despite the first appearances of beers from the local Tomintoul Brewery.

In 1995 the festival was called “The Last Great Grampian?” not because there wasn’t to be any more events but to recognise the demise of the Grampian region as yet again local authorities were re-organised. Over the next few years the now two-named festival (Aberdeen & North East and GGBF) evolved into a more standardised format with the introduction of a beer order split 50% from Scotland and 50% from elsewhere.

1995 also saw the first appearance of the most prolific beer over the 30 years but can you name it? The answer is at the bottom of this article.

Having operated for a few years with as many beers as could be squeezed on the stillage and a few beers stored under the bar counters and dispensed using handpulls a second bar was added utilising at first the smaller of the downstairs rooms and the following year moving to the larger room and replicating the upstairs bar format and of course utilising every square foot of space in the building as attendances continued to increase. These changes had enabled the beer range to creep up to 75. It had long been a common sight to see long queues outside the halls on a Friday when the attendances reached the hall capacity and a “one out and one in” door policy had to be operated. With neither Thursday nor Saturday operating at capacity there was still room to grow. The non-Scottish beer selections usually involved a theme. Initially they were based on broad geographical regions but latterly once all the regions had been covered they were linked to beer names or on some occasions puns.

As well as expanding the festival it had also started to host beer competitions including for several years CAMRA’s Champion Beer of Scotland.  Each year the festival had a nominated charity and raised a lot of money for quite a variety of worthy causes. The festival also had its own stab at universal suffrage with every drinker entitled to partake and vote for their Beer of the Festival; and an ensuing trip for the die-hards, sometime later when they’d recovered, to the winning brewery to make a presentation and sample the beer at source.

The number of Scottish breweries now able to supply had rocketed and constraints were applied on how many beers we’d take from each brewery. The year 2000 also saw the first “featured” brewery which entitled the brewery to get their logo on all the glasses and to be the only brewery with a slightly larger range of their beers on the bar. To ensure fairness it was a different brewery every year and other than they must be Scottish the choice was placed made by only those who had volunteered to staff the previous event.

In a bold experiment in 2002 it was decided to have a year without any English beers; supplementing the Scottish beers with those from Wales, Ireland and the Isle of Man. It turned out to be the best selling festival in the McClymont era.

Having managed to overcome the threat of the loss of the McClymont Halls in 1998, when fortunately the day to day management of the halls was taken over from the council by the local table tennis association there was no repeat of the escape following a CAMRA safety assessment of the building after the 2006 event. After 18 years a new venue was required.

After some soul searching and a lot of footwork in 2007 the beer festival lighted on the area under the Richard Donald Stand at Aberdeen Football Club’s Pittodrie Stadium.  The first event was still held in November but had to move to month end to avoid clashing with home football fixtures. The heavy snow that year and a reticence by visitors to go into the unknown didn’t help attendances despite a beer range now exceeding 80 along with a much larger range of cider and perry than had ever been seen before.

The biggest single step-change in the festival’s history was moving dates from November to coincide with the weekend after the end of the football season (late May/early June) to avoid last minute date changes (other than a Rod Stewart concert).  It’s fair to say attendances in 2008 were down and there were some unhappy people but it caught on and records were set in 2009 for attendance, beer volumes sold and beer range numbers. If there was a record year (so far) it would be 2010 (although 2013 came very close) when more beer was sold to more people and all 100 advertised beers were on at the very start.   It’s fair to say the Friday attendances stretched the capacity of the volunteers to keep pace with the demand for beer.

The festival has seen many very different visitors from all over the world, some like the invading Jarl squad from Shetland, coming in full regalia. We’ve also had visits from newly-weds, taking time out from their own wedding receptions to sample the ales and for some of the staff the festival was a life changer, meeting their spouses for the first time whilst doing bar work.

The 30th and to date final, festival was held in 2016.  There hasn’t been one since primarily due to the lack of someone to co-ordinate the organising. Whilst it is true that venue costs had escalated, attendances had never quite got back to their peak and possibly the emergence of alternative local festivals (imitation is the sincerest form of flattery) never under estimate the time, effort, energy, enthusiasm and expertise that go on behind the scenes of putting together “a little local beer festival”.

Many thanks to all those who helped by staffing the 30 annual beer festivals. You know who you are, and from 1995 we do too. Without you it would never have happened. In addition, thanks also to all those who helped in other ways, from passing on your expertise, advertising the festival, helping with logistical challenges, being a sponsor and drinking all that lovely real ale.  And the most prolific beer was Harviestoun’s Schiehallion which made 16 appearances in 30 years.

If anyone has any photographs, particularly of the early festivals, they are willing to share please let us know via the Contacts page. And if anyone still has a copy of the programmes from 1987 & 1988 we’d love a pdf version for inclusion on the website. 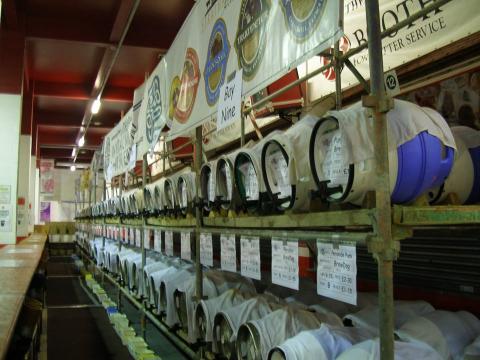