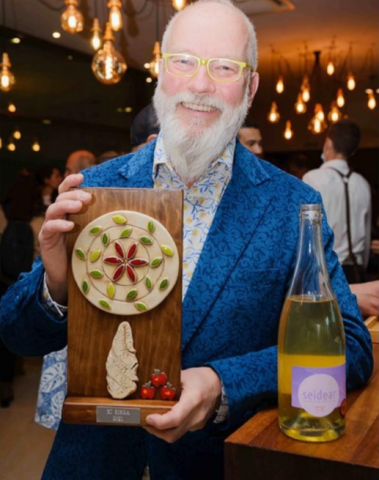 A local cidery has picked up a top award in an international competition for it's dry sparkling cider. And now the cider’s creator Christian Stolte (pictured) wants to spread “the word about CAMRA’s fantastic support for cider in the UK and to show off our great British ciders to the world”.

The Wee Scottish Cider Company, based at Kingcausie Estate, has yet to celebrate its second birthday but won the award for its Seidear at the 11th International Cider Salon in Asturias, Spain. Stolte used apples from local estates and walled gardens to make around 3,500 bottles. He says using the locally grown apples has been an important first step in reviving Scotland’s orchard industry. His cider was crafted from old varieties grown in historic walled gardens at Haddo, Cluny, Gordon’s, Fraser, Ellon, Craigievar, Falkland and private orchards.

Seidear is made using the same method as Champagne. The flavour is rounded through fermentation in the bottle using Méthode Champenoise. The fermented apples are put into bottles with a little sugar and Champagne yeast. Stolte said: “You leave them for around half a year on their side. After that we then put them into my homemade bottle holder at an angle. I have to turn them a quarter every day for a month.” “Last year I processed around five or six tonnes of apples. I do everything by hand – I don’t have a bottling line or anything.” The drink uses 100 per cent juice from freshly pressed apple juice. Stolte said: “My cider is low in alcohol at around 7 per cent and should be enjoyed like a wine, having a couple glasses and pairing with a meal, rather than guzzling a smaller bottle.” “All of the walled gardens have very old trees and people don’t really know what to do with the apples. The cooking and dessert apples make great cider. “Some of the apples I pick up myself, some I buy from the different castles which have an army of pickers. Lots of neighbours also give me their apples. I am mostly using apples others wouldn’t.”

To find out more visit www.seidear.com